Martin Tripp
Digital, News mediaComments Off on Newspapers: (some) reasons to be cheerful Clearly, the events of 2020 did not help the physical distribution of newspapers. There has been an overall drop of a further 22% in paid-for newspaper sales in the last year. We estimate that overall paid-for circulation for daily national newspapers dropped below 4m for the first time over that period. (This includes projections for the Sun, the Times, and the Telegraph, which have withdrawn from ABC audit.)

If this is accurate – and we think it is – newspaper circulation has dropped by almost 75% in my lifetime, even as the population  of the UK has grown by 20%, from 55m to 66m. 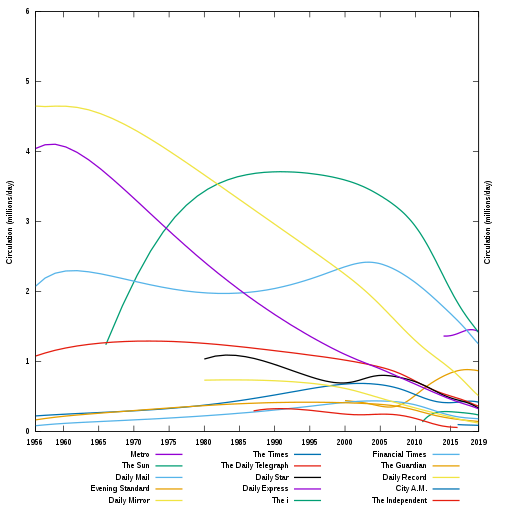 So far, so grim. But actually, while the industry was very slow to react to the changing demographic and digital landscape, the predictions of utter devastation have not quite materialised. Media businesses in general, and newspaper owners in particular, have finally realised that there are real opportunities in the digital landscape – and that pure clickbait is not the answer.

If you aggregate the digital reach of these brands, it is clear that they are reaching more individual users than they could possibly have done in their print heyday. The Guardian, for example, with a measly 132k print circulation in December 2020, managed an astonishing 347m visits globally in the same month. They were edged out by the MailOnline as top UK news site with 374m. Between the UK’s top five newspaper sites, there were 1.1bn visits in that month, and all of these were on the rise year-on-year. If you measure by influence and reach, there is plenty to cheer about.

Still, all this is vanity; profit is sanity. Until recently, those two great opposites the Sun and the Guardian have made extensive losses. In recent times, through sometimes savage cost-cutting and through diversification of revenue streams, both have turned the corner: after removing one-off costs (compensation for ill-advised ventures and restructuring), News Groups Newspapers could claim EBITDA of £30m or so in its last accounts, showing that the fundamentals are sound; and even the Scott Trust- backed Guardian made a small profit in the year before Covid, its first in decades. These are not outliers: Telegraph newspapers last month filed profits of £22m to January 2021, triple the previous year.  The Mail newspaper group made £56m, on turnover of £356m (of which MailOnline contributed £144m).

There is also increasing evidence that people are coming back to old and established media brands to sense-check the flood of bewildering disinformation that is currently published online – and this is leading to a revitalisation of trusted news sources (compare the BBC’s 1.3bn visits and CNN’s 830m with the Epoch Times, the fastest growing alt-right news source, which gathered 53m). By falling back on the virtues of old-fashioned, source-checked journalism, and underlining their history and pedigree, the UK’s newsbrands might just find a way to flourish and profit in the global digital swamp.

Overall, then, perhaps there is something to celebrate for the industry. Yes, it is tough; yes, it will continue to be tough. But by smart adoption of new approaches, and by leveraging those century-old brands, there seems to be life in the old dog yet.